I stepped out of the pool house where four of us had been sleeping into the early morning chill. Across the split rail fence some forty alpacas lifted their heads almost in unison and stared at me then one by one they resumed browsing. The sky was clear and blue and held all the promise of a perfect day for the seventh and final day’s ride – into Burlington, Vermont !

Six days ago we had met up in Norwalk, CT, to ride the inaugural ride along the Western New England Greenway (WNEG).   The idea of a north/south link between New York and Montreal had come into being following a conference held in Bennington, VT in the Fall of 2011. The conference had brought together some 21 existing organizations working on creating their own bike paths along what we called the WNEG corridor. After much discussion it was decided that the lead would be taken by the Bicycle Committee of the Upper Housatonic Valley National Heritage Area.

At the November 2012 conference a decision was taken to ride the route now, even though there was a very long way to go to create an off road route.  I was asked to organize the first riding of the WNEG, and the date was set for August 11-17 2013.

Over that winter Lou Bresee of the Lake Champlain Bikeways worked on drawing up cue sheets and maps, with funding provided by the Champlain Valley National Heritage Partnership, and I rode sections of the route to decide where we would stay each night.  At first we thought of having a group of 20 riders, but the final number of those committed to ride was eight, ranging from the youngest at 26 to the oldest on the far side of 60, but all sharing a deep love for cycling and bicycle touring in particular.

The eight of us had quite varied backgrounds and brought together a considerable experience of bicycle touring. Karen and Bob Votava came from Rhode Island, Karen being one of the co-founders of the East Coast Greenway and it’s first Executive Director from 1996-2009. Dan Mcguinness  and his wife Cassie were seasoned bike tourers. Tom Sexton, Regional Director of the Rails-to-Trails Conservancy, came up from Pennsylvania with Akram Abed, one of his regional managers, at 26 our youngest rider and a 6foot 3 inch power house who was always full of energy and good humor !  Bruce Lierman, President of the Vermont Bicycle and Pedestrian Coalition came from Bennington, and my wife Raymonde and myself made up the eight riders. All were on single bikes save for Raymonde and I who used our tandem.

By Spring I had selected accommodation for seven nights, trying to keep the mileage down to around 40-50 miles per day to allow for meetings and looking around.  We also had a support vehicle from Rails-to-Trails with people sharing driving and riding.

Day one we rode out from Norwalk, along the Naugatuck Reservoir and stopping for the night in New Milford at the Homestead Inn, a cozy bed and breakfast situated just off the beautiful Green in New Milford.  We found many good places to eat !

We had our one and only puncture that day for which we were very grateful !  The next day, Monday 12 August, we had our longest day, some 62 miles up to Great Barrington in Massachusetts, but much of the route was flat and quiet dirt backroads. We went through the Bull’s Bridge covered bridge and the West Cornwall covered bridge, both over the Housatonic River.  At West Cornwall we also had a meeting with the Selectman, Gordon Ridgeway which had been organized as all  our events along the route were, by Dan Bolognani, Executive Director of the Upper Housatonic Valley National Heritage Area. who had also provided a support vehicle for us.  We split the driving on a half day basis, excepting Raymonde and I since we were on a tandem !

The small town of Cornwall (population approx. 1400), is steeped in History. Joseph Allen, father of Ethan Allen is buried here, as is General John Sedgwick, the highest Union casualty in the Civil War, who was born and grew up in Cornwall.

We carried on along the dirt River Road, crossing railway tracks seven times in four miles, following the Housatonic into Massachusetts, where we stopped for the night at a Travel Lodge in the Berkshire town of Great Barrington, where we found wonderful places to eat !

Tuesday dawned grey and damp, and too a drizzle set in. This was no problem but heavy rains and thunderstorms were coming. We soldiered on to Stockbridge, of Norman Rockwell and music center Tanglewood fame. The driving rain stopped us enjoying this beautiful town, and we ducked into the General Store next to the Red Lion Inn for a second breakfast and watch the rain fall. Since we had a support vehicle we decided to bail on the day’s ride and van the riders up to Williamstown, some 25 miles north of us.   By late afternoon the storm had passed, and we rode back to explore the Ashuwillticook Rail Trail, which runs 11 miles from Pittsfield to Adams.

Williamstown is home to Williams College, and also to the Clark Institute (founded by the Singer heirs), which along with Mass MoCA (Massachusetts Museum of Contemporary Art) and the Williams College Museum forms of significant art museums in the northern Berkshires – and we found many great restaurants to chose from !

On the next day the sun came back and stayed with us for the rest of our ride to Burlington.

Leaving Williamstown we crossed into Vermont at Pownal, and of course met with steeper hills than we had experienced up to now – Vermont is definitely not flat !  We had a great lunch in Bennington, had a photo shoot with a local paper, and visited the Battle Monument and Robert Frost’s grave.   From Bennington we climbed up the dirt East Road, then had a beautiful long descent into East Arlington, following in sequence Warm Brook Pond which led onto Ice Pond Road – and visited the Village Peddler (and Chocolatorium) where we treated ourselves to frozen bananas coated with chocolate !

That night we stayed at the Candlelight Inn in Arlington, then on Thursday we met State Senator Bob Hartnell and Amy Verner, bicycle advocate and owner of the Battenkill Bicycle Shop.  Amy sprang to our rescue when we had one bicycle breakdown and had her bicycle mechanic fix the problem and get us back on the road. We had a photo op with a journalist and rode on towards Paulette, where we had a superb lunch at the former railway station.

From there we rode to Poultry, for an afternoon tea stop at the General Store.  Our night stop was in the Marble Mansion Inn at Fairhaven.  Each room had a library theme, Karen and Bob were in the Shakespeare Room, Raymonde and I were in the Kipling Room, with works by the author on the bedside table ! 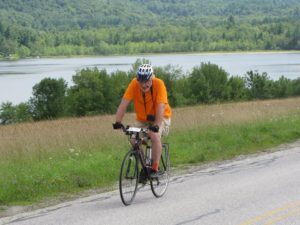 On Friday we rolled along mainly off pavement, passing Sunset Lake, with a lunch stop at Buxton’s General Store in Orwell. That afternoon we saw Lake Champlain for the first time, and found our most unusual accommodation at the Lake Champlain Alpaca Farm, where we were put up in the pool house – next to a most inviting swimming pool !

Saturday saw us riding down to the shores of Lake Champlain at Crown Point, then on to Vergennes, where Commodore Macdonough built the fleet which defeated the British on Lake Champlain in the War of 1812.

Coffee was enjoyed at the Three Squares in Vergennes, and then we were on the last stretch ! We rode to Charlotte, where we were met at the Old Brick Store (more coffee) by Lou Bresee, who had developed the maps and cue sheets that we were testing out, and who had not been able to join us in Norwalk. The Old Brick Store is renowned for sandwiches, so we had lunch there before heading down to the smallest covered bridge in Vermont along the lake shore and so into Shelburne, 12 miles from downtown Burlington.

Coming into Burlington we stopped at the Trailside Center run by Local Motion, the Vermont pedestrian/bicycle advocacy group before we dispersed to our various accommodations in the city.  That night we gathered at “Splash !”, the Caribbean style bar/restaurnat on the floating dock to celebrate the first riding of the Western New England Greenway.

Brian Costello, one of the co-founders of Local Motion, invited us to ride out along the Causeway Trail and take the Local Motion Bike Ferry to the Champlain Islands, which four of us did the next day, visiting an apple farm before returning to Burlington. 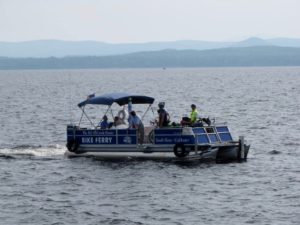 This first ride was really more of a reconnaissance ride (but great fun) and we tweaked the route in places where we found better alternative routes.

In 2014 we rode the WNEG in reverse, from Burlington down to New Milford, then in 2015 and 2016 we rode it again, each time with more riders and more publicity superbly organized by Dan Bolognani, and that year Adventure Cycling approved our route as national U.S. Bike Route 7.

At this point we had arrived at our goal, and now we have a more complex task – getting U.S. Bike Route 7 signs the length of the route ! 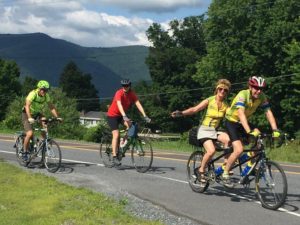 The ride along U.S. Bike Route 7, as the Western New England Greenway is also called, is a beautiful cultural and historical journey through the Upper Housatonic Valley National Heritage Area into the Lake Champlain National Heritage Partnership.  Try it someday – you will not regret it !